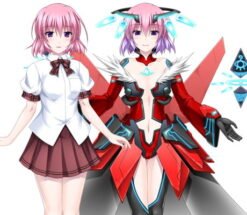 Side-scrolling beat-em-up ero action!
Finish stages in Mission Mode or
earn points and upgrade in Adjust Mode
The game’s fully loaded with challenge!
Put the combo beatdown on enemies and
try to clear all 7 stages!

Customizable difficulty and CG unlock features
mean you can enjoy all the content!
Created for the enjoyment of hardcore and casual gamers alike!

Play with a keyboard, controller, or mouse!

Creatures of every kind offer a different flavor of fornication:
brave the likes of pigmen, spideresque, werebeast, chameleon, golem,m
classic tentacle r*pe, special slime play, as well as common people
and clone soldiers (including women!). Gangbangs and interspecies sex.
… With different endings based on how often you fail and get f*cked!

Premise:
A bizarre threat suddenly kidnaps two sisters: Akira and Kaede.
Akira wakes up transformed by the experiments of an organization called
“Eitraizen”.

Akira’s singular plan is to rescue Kaede,
an epic mission aided by her strange new superhuman powers.
She can transform into “Blazing Angel Mistletear”,
a holy war princess with godlike power … to make her enemies pay!!